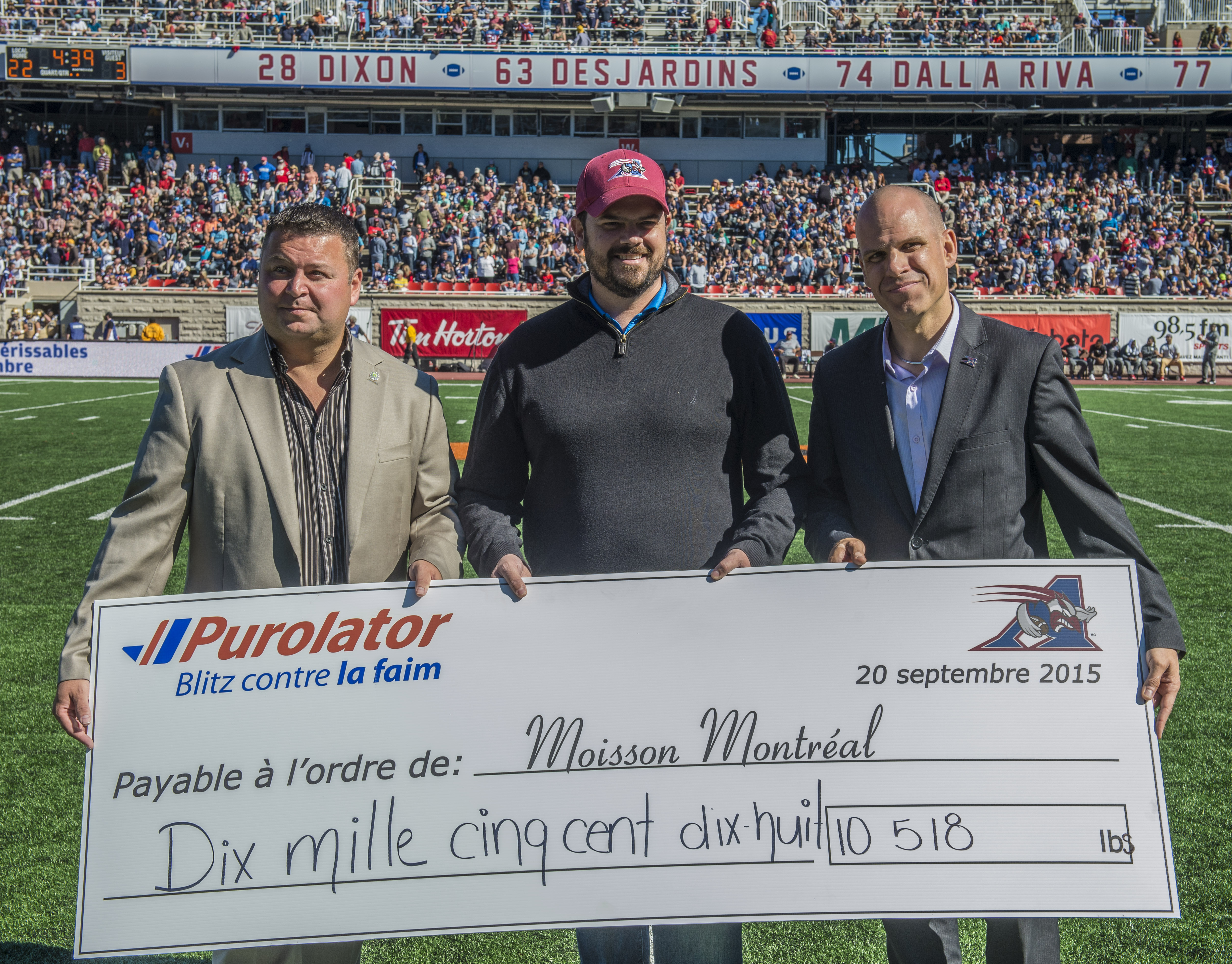 “Thanks to the outstanding and inspiring support of Montréal Alouettes fans, this year’s Purolator Tackle Hunger Game Day Food Drive raised more than 10,500 for Moisson Montréal,” said Patrick Nangle, President and CEO, Purolator. “The food and funds raised will go a long way in feeding those affected by hunger in Montréal and surrounding areas.”

Now in its 13th season, the PTH program raises awareness, food and funds for local food banks across Canada. At one game in every Canadian Football League (CFL) city, Purolator organizes a Game Day Food Drive and encourages fans to drop off non-perishable food items or a cash donation in support of food banks in their communities.

“Moisson Montréal is proud to be the recipient of the 2015 Purolator Tackle Hunger® program in Montréal. This new collaboration comes at a key moment for our organization and will surely increase awareness about food insecurity and waste locally”, explained Dany Michaud, Moisson Montréal’s Executive Director. “With the addition of the Montrel Alouettes and Purolator to our list of corporate partners, we hope to get the attention of the public and corporations who wish to support our activities. Thanks to third party initiatives like this one, Moisson Montréal is able to offer emergency food aid to 140,000 people each month and develop sustainable and innovative solutions to local food waste problems.”

About hunger in Canada

Hunger is an important issue that affects Canadians across the country. According to Food Bank Canada’s 2014 HungerCount report, more than 840,000 Canadians – 36 per cent of them children – visit food banks every month.

As part of its commitment to helping alleviate hunger in the communities where it operates, Purolator Inc. works closely with its employees, partners, agents, customers and food banks across Canada to collect donations and help raise awareness about the issue of hunger in Canada. Since its inception in 2003, the Purolator Tackle Hunger® program has helped deliver the equivalent of more than eight million pounds of food to food banks across Canada. For more information, visit purolatortacklehunger.com.

A non-profit organization founded in 1984, Moisson Montréal is today the largest food bank in Canada. Through its centre for collecting, sorting and distributing emergency food assistance, the organization allocates nearly 800 tons of food per month to more than 240 accredited community organizations on the Island of Montréal. In turn, these organizations provide food assistance to 140,000 people, including 40,000 children between the ages of 0 and 5. Moisson Montréal receives funding and supplies mainly through donations. Its operations require the collaboration of nearly 8,000 volunteers each year and result in the redistribution of about 13 million kilos of foodstuffs, representing a total value of close to $61 million. Winner of the 2015 Novae Corporate Citizenship Prize in the Supply category for its Food Recovery Program with Supermarkets. For additional information: www.moissonmontreal.org.