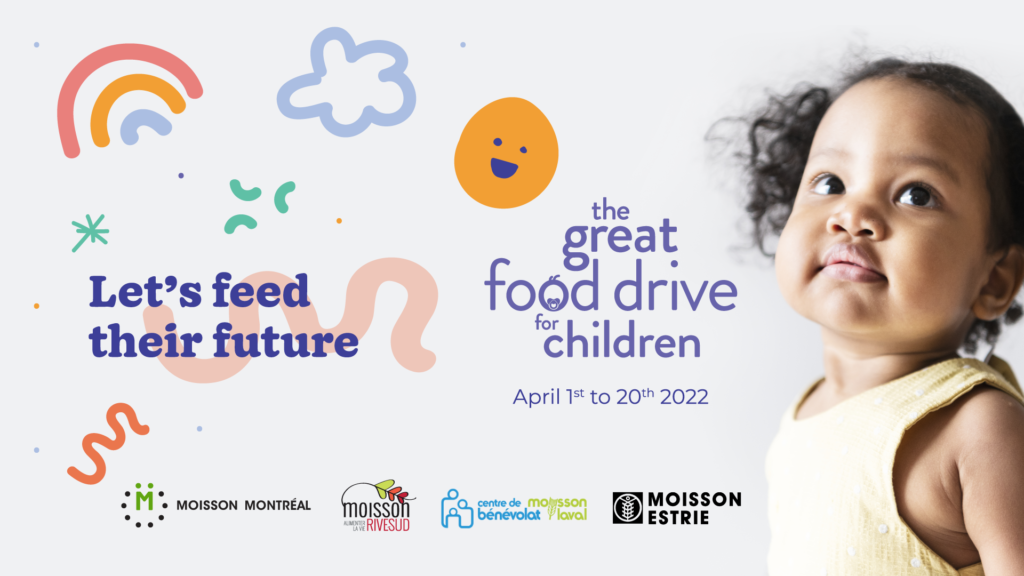 Montreal, March, 31st – While supply problems are multiplying in the biofood network and the cost of a basket of groceries is skyrocketing, Moisson Montréal, Moisson Estrie, Moisson Rive-sud and the Centre de bénévolat et moisson Laval are inviting the public to be generous during the Great Food Drive for Children. The campaign runs until April 20 and aims to support organizations that provide food aid to expectant mothers and families with young children.

In previous years, the Moisson organizations could rely on major campaign partners to provide food for young children. This year, the Great Food Drive for Children will have to rely essentially on the generosity of the general public. “We have a dynamic and committed network of donors, but the current economic situation means that they cannot support us as much as in past years. This is why we are appealing to the general public, because the consequences of hunger are particularly dramatic for infants,” said Richard D. Daneau, Executive Director of Moisson Montréal.

Continuing to provide food to organizations is a challenge in these difficult times. As the cost of groceries continues to rise due to inflation, the reliance on convenience food is exploding, particularly in organizations. This is an alarming trend. The four Moisson organizations must ensure that they can fulfill their mission to provide relief to the thousands of people in need.

The promotional campaign will run for three weeks. Under the theme “Feed Their Future,” young children will be featured during mealtimes in photo and video images. Web promotion will be a major part of the campaign, notably through a strategy of publications on social media. Several influencers have been invited to share surefire tips for toddlers at mealtimes.

To feed the future of our children, make your donation (until April 20) at granderecolte.com.